How those Tudor-ish mugs turned out 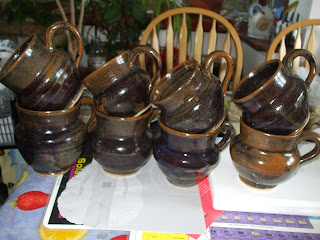 Some time ago, I was asked to make some Tudor compatible mugs for a family who intended to do a reenactment. I made the forms, I even glazed them and loaded them in the kiln, but then didn't fire. I hadn't got a full load, and I do like a tightly packed kiln. So they waited. 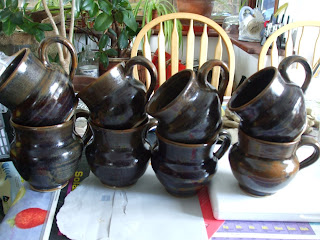 But the first ones were fine. Here they are, both with a flash and without. It's a glaze that changes quite a lot with lighting. I wonder how it will look in sunlight and by camp fire. 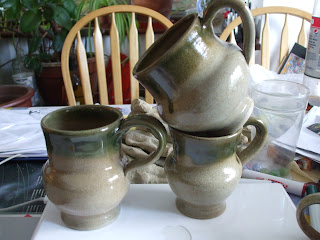 But in the mean time, I spent more time looking up Tudor mugs, and made a new batch with bigger feet. And higher handles. I can find examples for most shapes I like to do among Tudor mugs, but actually making them look Tudor was harder than I thought. I found some with a hint of green, which pleased me. I like my green glaze, and I felt I had permission to use it over my clear glaze. 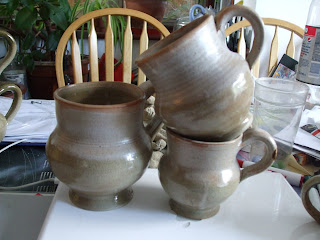 I also dipped a few rims in my yellow glaze, which comes out anywhere from creamy white to dark orange, but rarely actually yellow. I got white. Subtle, but I think it works. 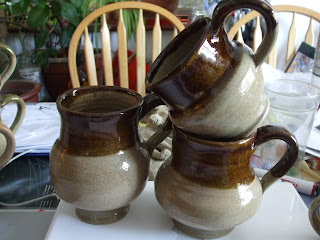 Brown is a bit classic, but still pleasing. 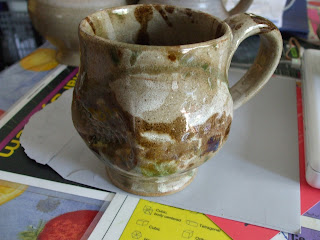 There was that one mug I felt I had to alter. I used all the colours from the Tudor mugs on it in my usual splashy style. 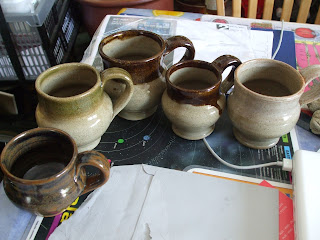 And I made some small ones, which were meant to be a joke on people who drop by and mock my large mugs, but as it turns out, they were wanted for Tudor children. So no joke.

They've been sent off to to the Tudors, except the one altered one. If any they come back, I'll have them at Cambridge Open Studios in July 2012.
Posted by Ozone Louise Ceramics at 14:57